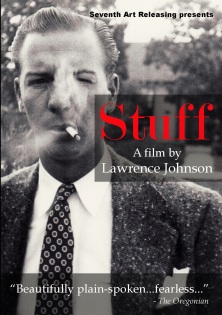 When his father dies, filmmaker Lawrence Johnson must sort and distribute the garage-sized storage unit full of his father’s stuff. What is at first both an obligation and albatross becomes liberating as the filmmaker sheds his own possessions to find himself. Through the interwoven stories of the filmmaker and his friend, Phil Wilson, STUFF re-enacts

the drama of interrupted development and show how it affects the protagonists’ growth as men. It will also show how a father’s sickness and death stimulates an urge in a son to seek the fulfillment of an unanswered need for intimacy with the father.

“Hoarders meets Hamlet as documentarian Lawrence Johnson takes responsibility for his late father’s avalanche of personal effects. Storage facilities are filled to the brim with mysterious mementos, photos and bric-a-brac, just as the movie is packed with themes: memory, faith, misogyny … oh, and the  institutionalized impoverishment that has led an entire generation to consider its downward mobility a personal “failure.” Yet the doc doesn’t press any one point too hard, a fine choice for a film that dares to ask how much crap you want to carry around with you.” (5 Stars) -Orlando Weekly

“Lawrence Johnson’s beautifully plain-spoken “Stuff” explores the filmmaker’s relationship with his recently deceased father through the voluminous amount of ephemera collected by his parents over the decades; fearless about facing questions of mortality, faith and personal failings, the film was made as Johnson was drifting into homelessness.” -Stan Hall, The Oregonian

“Wherever there’s a stick game, there’s a crowd.”

Every year, thousands of American Indians pack up their lawn chairs and hit the “Hand Game Trail” on reservations throughout the west. The first and only feature documentary on the subject, this fascinating video explores the mythic and historic roots of contemporary gambling in Northwest Native America. Through plenty of beautifully photographed games and on-the-spot interviews from five states and seven reservations, HAND GAME takes you on a journey through Indian country, a journey full of laughter, haunting music and engaging characters. 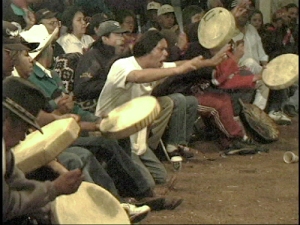 “HAND GAME is truly exciting watching and a look into a living part of American Indian culture.” -Whispering Wind Magazine

Carnival in the New World is a synthesis of European elements — Christian traditions and the masquerade — and African elements — primarily music and dance. In Trinidad, Carnival is a colorful, exuberant celebration of national focus and pride. Preparations are made throughout the year and reach a frantic pace just before Carnival begins.

This informative and thoroughly enjoyable documentary goes behind the scenes to capture the spirit of the celebration and explore its major events and aspects. The video features sequences on the history and culture of steel drum and calypso music and comes with a printed glossary of Trinidad Carnival terms.

“Mas Fever” is a timeless and essential work for all classes dealing with the African diaspora, cultural anthropology, Caribbean or Latin American studies, comparative religion, or ethnomusicology.

It was produced and directed by Glenn Micallef. Principal photography and editing by Lawrence Johnson.

“A lastingly artful presentation of the buzzing confusion and profundity of Carnival. The interviews are illuminating and the steel music, always difficult to capture on tape, comes through majestically. The video offers a rare glimpse of the human spirit liberated from the chains of everyday decorum, at home in the company of dancing gods. —The Beat (Journal of World Music)

The economy has no manners.